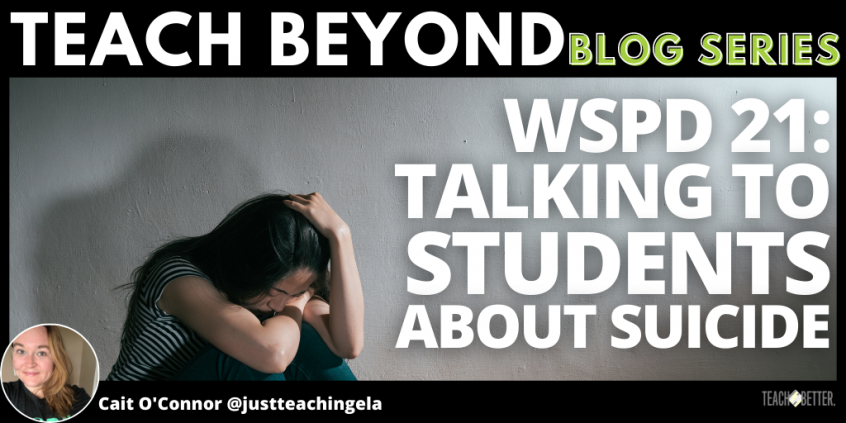 Generally, I don’t talk about this subject. But this issue is one that’s important to me. Given the focus on mental health in a pandemic, it’s more important than ever that we talk about how to talk about suicide.

Every year on September 10th, organizations and individuals acknowledge World Suicide Prevention Day. Suicide prevention is about more than sharing a hotline and referrals and resources. Suicide prevention and alertness is everyone’s job, year-round; especially at school.

Talking About Suicide: It’s Not Only Up to Counselors

Teachers, nurses, school-related professionals, and paraprofessionals all have a role in discussing, preventing, and de-stigmatizing suicide at school. The topic of suicide and mental illness may seem like one that is bound only to come up in health class, but it’s a subject that truly transcends content area boundaries. Suicide prevention is everyone’s job.

Given the focus on mental health in a pandemic, it's more important than ever that we talk about how to talk about suicide. Click To Tweet

Studies have found that ‘warning signs’ are less common than we think. This means that for our students, we have to ‘reach in’ and invest in their social and emotional health, instead of expecting them to ‘reach out’ to us. Becoming a trauma-informed, suicide-alert educator is necessary work.

However, teachers are not mental health professionals. It can be overwhelming to feel like we need to take on the role of social worker or counselor, but we can’t control what information we are aware of and what students tell us. It’s important that we don’t just pass the buck, especially if they trust us enough to tell us how they are feeling or that they’re worried about a classmate or friend. But we don’t have to handle the situation alone, and we can emphasize to students that we are going to help them build a team or a network to keep them and/or their classmates safe.

As an educator, you are a mandated reporter, and this means that the information that a student tells you cannot stay with you alone. Students should know that you’re interested in keeping them safe; you want to help them find help that they can trust. Thank them for trusting you with their thoughts and move into action.

People often think that discussing suicide or even saying the word can prompt someone who is considering it to act.

In reality, being upfront about suicide stresses the finality of taking one’s own life, and can actually prompt conversations that keep people safe in the long run. There are a number of ways to talk to people about suicide without glorifying the act or triggering them, and these nuances are important.

If you’re going to ask someone if they are considering suicide, don’t use euphemisms; be direct.

Avoid terms like “hurt yourself,” which downplay the issue. Harm and hurt are words for when a person is engaging in self-injury. These actions or feelings may not be related to feelings of suicidality and can muddle the resources or help they receive.

The person matters more than the means.

If you think someone is going to act on suicidal thoughts, asking them about the means by which they have a plan is a way of risk assessing. It can tell you a lot about what tools they have access to, what their timeframe might be, and how to proceed with getting them help to stay safe.

When discussing a completed suicide, however, the means by which a person acts are not the important part.

This emphasizes the action rather than the person and minimizes the factors that led them to be in pain in the first place. “Took one’s own life” or “died by suicide” are more appropriate, because they take away the connotation that a person had control over the mental health crisis conditions that led them to feel like suicide was their only option.

What can your school do to address and prevent suicide?