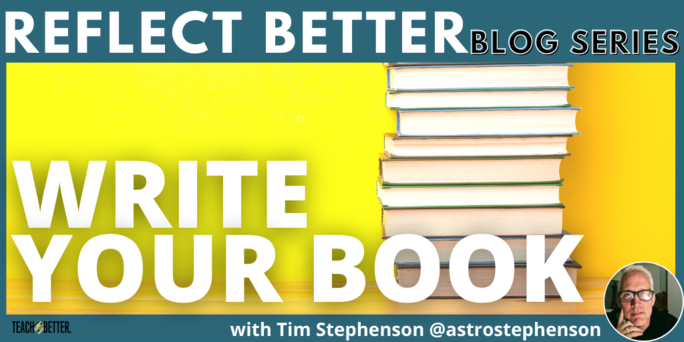 Let me tell you a little story that comes with a caveat. The caveat is you have to tell me one next. You see, we all have a story to tell. And as much as you might think that your story won’t mean anything to anyone, I think you’d be surprised. You see, writing is like music or art. The artist has a melody in their head, or a picture in their mind and hears it or sees it so vividly. They just want to get it out so that others can feel it, mingle with it, perhaps relish in it equally as much.

However, I’ll choose the year 1994 when I was just starting out as a teacher. I suppose I was the artist in this story because it was during that year when I felt compelled to awake early, pre-dawn, and begin to write. We were living in a Canadian town and it was winter, so there was no sunlight streaming through the window.

My early morning routine was to wander into the living room of our small townhouse, get comfy on the couch, illuminate the space with a single light and then grab a pen and a pad of paper. I’d sit there and stare at the page, although not for long, as it were. For some reason, while I sat there, thinking about this fresh career I had just begun, the words started to spill out of my pen. It was in these moments that I realized I was a writer.

Have you ever thought about setting aside some time in the golden hours of the morning, when nobody else is around, and putting pen to paper? What would grow from your mind's eye if you wrote about your teaching practice? Click To Tweet

I quickly scrawled out my thoughts on how a student can find success in school.

I wrote about the role of family (my wife and I had two boys at the time, both under 3). I’d considered the role that the entertainment industry had on the students’ attention span. I reflected on how passions, hobbies, and personal interests made students more vibrant and willing to learn. I wrote about things and people that I noticed, which I thought were good examples anyone could benefit from.

The sheets of paper started to really pile up and I started to organize them into themes. It wasn’t long before I realized I had what amounted to a book with several chapters. Then one day, the ideas just sort of stopped flowing. I put down the pen, organized the papers, and realized I had just written (as Dave Burgess would say), my teaching manifesto.

Write Your Book: It was this document that, looking back after all these years, guided and shaped my entire practice as a teacher.

Through the writing process, I crafted the teacher that I thought my students would need me to be. I set out to write about education, but in doing so, I discovered who I would be as an educator.

I ended up typing the entire manuscript and printing it out. Then I got it bound at Staples and still have a copy or two of that “book” even now. I often referred to it over the years and wondered what it could do for others who might’ve read it. However, I mainly wrote it because the words needed to come out. I could think of it as the single most important professional development I ever took part in. I wrote my book.

So I ask you: Have you written your book?

Have you ever thought about setting aside some time in the golden hours of the morning, when nobody else is around, and putting pen to paper? What would grow from your mind’s eye if you wrote about your teaching practice? Would you crystallize the reasons why you teach? Would you elevate concepts or practices that draw students in, pushing them to develop their passions? Or would you write about a classroom environment in which you would love to be a student yourself? What aspects of your teaching practice would end up on the director’s “cut floor”? What lessons would you develop that you could sell tickets to? The possibilities!

It’s Time to Write Your Book

Recently, I took that book and re-wrote it. It became what I call: Beyond the Classroom. It is now available in paperback and e-book on Amazon. I thought that as I find myself at the other end of a teaching career, maybe I should revisit that original manuscript. I worked on it for over a year. Ultimately, I followed the advice I’m giving you. I wrote my book. That first one I wrote for me and it helped my career immensely. Now I’ve written one for you and after almost 30 years of teaching, I hope this one can help your career too.

Reach out to me anytime and let’s talk about how writing will help you reflect better.

Tim has been teaching in Langley, British Columbia for over 25 years. He’s a science teacher, particularly astronomy, which is a course he has developed into a full credit senior science course. In his school, he is known as AstroStephenson. Way back at the beginning of his teaching career, he wrote a book for himself that contained his teaching philosophy. It was a project that would define his career.

From the very beginning, he knew that he wanted to teach by putting students and relationships ahead of content, and putting experiences and emotions ahead of curriculum. The result has been a long career of rich and rewarding experiences for both himself and his students, the pinnacle being in 2018 when he was the recipient of the Prime Minister’s Award for Teaching Excellence. Now Tim would like to share with you his thoughts and experiences on teaching with the hope that by reflecting better, you will feel empowered to try new things, teach in new ways and see the possibilities that are there for all of us in the teaching profession.