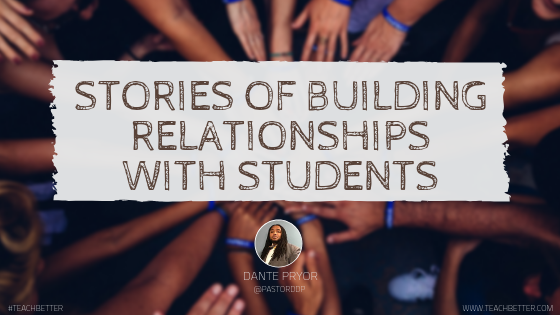 There is nothing more important to a classroom than the relationships you form with your students.

I learned early as a teacher the old adage, “They don’t care how much you know until they know how much you care.” Something as simple as a birthday card can be such an inspiration to a child. It is assumed that since we teach, we care. That is not always the case. Teachers carry their own personal beliefs, cultural upbringings, and bias to their classrooms. Most educators want to care, and do what’s best for their kids. But it’s not always as easy as it sounds.

So how do we focus on that, and always care for and do what’s best our students?

There are students that don’t know what they can be because no one has told them what they could be yet. Click To Tweet

Here’s a story…I was walking the hallway and a young student was walking in the hall as well. She didn’t appear to have a pass. Another teacher stopped and asked her, “Young lady, where are you going?”

The student replied, “To hell if I don’t pray!”

I laughed very heartily. The other teacher looked at me, a bit startled.

I asked the young lady, “You have an old country grandma don’t you?” She looked, smiled, and exclaimed, “Hazlehurst, Mississippi!” I explain to the still shocked teacher that she didn’t mean anything by it, rather; it was a jocular quip that older southern people of color would use from time to time. The student pulled out her pass and went about her business.

This other teacher was still rather offended. She told me, “She better not do that when she comes to class later, or she might get a detention.” My reply was simple, “She wasn’t being disrespectful. In fact, she told me you were her favorite teacher. She must feel rather comfortable to use a cultural quip toward you.”

The teacher thought for a minute, and it seemed as though she got it; the young lady didn’t get a detention that day.

Interest surveys and attempting to make lessons culturally relevant are important. However, we must be intentional when it comes to understanding our students’ culture. This isn’t easy. Cultural context isn’t easy. There are layers to culture, ethnicity, and race. If you couple that with one’s sexuality (especially with older teenage students), you could potentially have a coup on your hands. You have to be intentional about getting to know and understand your students.

This is what we know:
Only 18% of teachers nationwide are minorities. Just 20% of administrators are minorities. And a mere 8% of teachers are immigrants. There is an increase in minorities and immigrant children in classrooms (especially in suburban areas), but those aren’t reflected in teacher demographics. This can create many challenges for teachers when it comes to cultural understanding.

I am a graduate of Wabash College. If it weren’t for Eleanor Dailey I would have never gotten there. She was both my freshman English and US History teacher. Ms. Dailey was the first teacher to tell me that I was special. She would often tell me that I was meant for a unique place like Wabash.

The most important part of me she saw was what I could become. In order for a teacher to establish an authentic relationship with their students, they must see what they can become. Ms. Dailey always kept up with me, and she even helped me get my first high school teaching job. Don’t get me wrong, when you have 100+ children in the run of a school day it’s difficult to invest in a student to this extent, but when you see one that might be worth investing in, do it for that kid.

Ms. Dailey was an older white woman from Valparaiso, Indiana. Our experiences were as different as our skin color, but that didn’t stop her from pouring into me the idea that I could be something. There are students that don’t know what they can be because no one has told them what they could be yet.

At my current school I had a student that asked me a question one day. “Do you know where you are?” he asked with a smirk on his face. “I do. I’m in a classroom with my students.” I replied smugly. I had just been hired and I came in teaching Senior English. I decided that I would teach MacBeth. I’ve always loved teaching Shakespeare, and I love teaching kids the classics.

His reply was, “But you know we are the bad kids, right?”

“I know this is a classroom, and what you do doesn’t have to define who you can become. I teach Shakespeare because I love Shakespeare, and I believe you have the capacity to comprehend the material. It might be difficult, but difficult doesn’t mean impossible.”

That was my reply. There were these kids who made mistakes and they had such a capacity to be great at something, but they were so consumed by how they were categorized for making bad choices so young in their lives. It wasn’t an easy year, but we studied MacBeth, and other classics. They struggled, but we pushed through and made it through the year. They all got their diplomas and are now doing something with their lives.

There are times in our careers where we have to press students to do the difficult and unfamiliar. Teaching something like MacBeth was not comfortable, it was not easy. But we built a relationship on that struggle, and I believe they took something special away from knowing I looked past the labels they had been given, and saw what they could be.

Are you looking past the labels your students are given? Are you seeing what they can be? I truly hope so.

Dante Pryor was born and raised in Gary, Indiana. He graduated from Lew Wallace High School in 1997, and Wabash College in 2001. Dante began his teaching career at Gary Urban Enterprise Association, a non-profit organization that specializes in Adult Basic Education. After he completed his Master’s Degree in Secondary Education, he began his secondary teaching career at 21st Century Charter School in Gary, Indiana. Dante moved on from 21st Century in 2006 and began his work in School City of Hammond at Clark High School. Not only did he teach English, but he coached boys’ tennis, and forensics (speech and debate). He spent 10 years in Hammond at both Clark and Eggers Middle School.
Currently, Dante is an Instructional Coach at Neighbor’s New Vistas High School in Portage, Indiana. He is married with two children, speaks frequently at educational conferences during the summer with aspirations of being a conference speaker and writer.