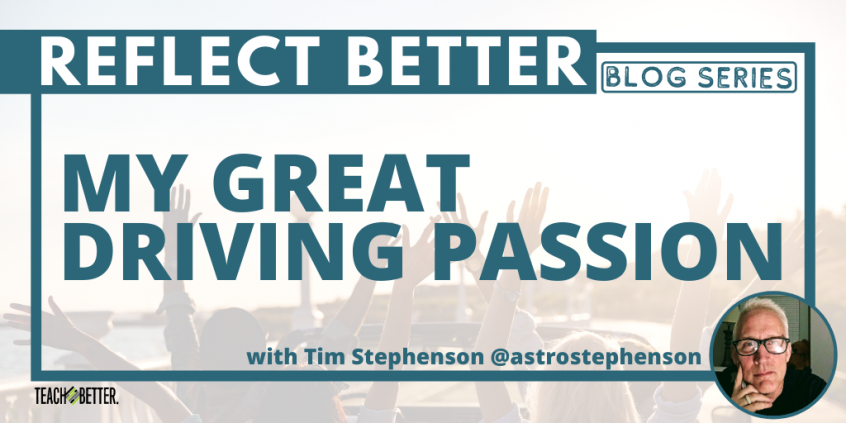 In the years between 1994 and 1997, I began listening to some powerful content.  I think it was my mother who got me onto these audiotapes; one of them was by a man named Jim Rohn, the one they called America’s businessman.  He had a way of motivating a person to do far more than they thought they ever could, just applying the simple philosophies he learned from his mentor, Mr. Shoaf.

I recall some of his excellent tips, like when he talked about the man who thought everything was too expensive. Rohn would say, “you just don’t earn enough!”  Or the lecture he gave instructing you on where to start to move towards your dreams and goals.  He said, “you pick up a rock and throw it in the air; where it lands, that’s where you start!”  Simple advice, but delivered in a powerful way—using powerful voice, emotion, and stories.

I lived inside of these talks for months, listening to them repeatedly, able to quote them even 25 years later!  In the first few years of my teaching career, listening on audio tapes in my car, I was a disciple of this man. It influenced me to be the teacher I am today.

Have you ever stopped to really notice the power of a teacher that has emotion and inflection of voice, and stories to make learning interesting?  I have, and the team at Teach Better has given me this fantastic opportunity to share this new blog series with you that will revolve around this theme of reflecting better, perhaps like you never have before.

So what did this time spent in my car under the tutelage of a great teacher inspire me to do?  This of course is a question that every great teacher will ask of themselves.  “What am I inspiring my students to do, to change, to become?” If that isn’t being asked, then all we’re talking about is the what of teaching, when really it’s the why that has the power to be life changing.

I wanted teachers to stop thinking that their subject lessons were the most important thing, and recognize that the value of what they do is in the relationships and impressions that they leave behind. Click To Tweet

Reflect Better by focusing on the WHY.

My classroom is not about “what are we learning,” “what will be on the test,” or “what year did Columbus sail the ocean blue?”.

The classroom must be about why we are learning this.

I know this is the one question that most teachers find so frustrating to hear from their students, but you have to be able to answer this!  Have you ever really thought about why you’re teaching the content that you are?

Well in those years during the mid-90s, I wrote a book about teaching.  And yes, I started it before I had gotten my first full time teaching contract.  So, you might say I was not the most credible author on education…but I had passion!

For some reason, there was this thought deep inside of me that believed that every student in every school had the potential to do something great with their lives, and all I needed to do was write about it.  I suppose that was pretty naïve, quite altruistic, definitely idealistic…the very idea that I would have some positive influence on young people and shape their future.  Pretty ridiculous right?

Reflect Better by considering where you started.

But hold on!  Here’s what I wrote in the first chapter of that book almost 25 years ago:

“I’m young, I’m idealistic, I’m a big picture thinker.  That is the position that I find myself in and I am embarking on an effort to take advantage of those traits. Perhaps my motivation comes from an ancient scenario in the Bible when the great leader of the early Christian church, Paul, said to one of his young proteges: “work with your gifts and they will make a place for you”.  We all need to be working on our gifts and talents, seeing what positive thing we can do in the lives of others and that has become for me a great driving passion in my life…to use my talents to see what positive effect I can have on the people I meet and the students I teach”.

What if every teacher, every leader, every parent, thought this way?  What can be so bad about a person believing they can do something before they got started?  Sports teams at the beginning of the season believe they can win the championship.  Runners at the start line believe they can finish the marathon.  Farmers believe they will see the harvest after they plant (that’s a classic Jim Rohn point right there!).

So why couldn’t I believe that as a new teacher, I would do things that would inspire others to achieve greatness? Why couldn’t I try to do things differently if I truly believed that it would result in something great for the people in my charge? Why should I do what everyone else had done in a classroom for decades, when it was abundantly clear that (generally speaking) there was a certain disdain that students held towards school?

You see, I was just willing to approach teaching a little differently.  I decided early on that I wasn’t going to play the game the way it had always been played because nothing great was ever achieved by doing things the same way year after year.  I had to innovate. Create. Grow with the times. Learn from the experts. Be like the champions.

Weren’t we at one time told to Be Like Mike?  Why?  Because maybe Michael Jordan was a special talent that was hard to copy, but his drive and motivation is available to anyone!  Be Like Mike!  Of course, we should be.

Why would I strive for mediocrity when there was a burning desire to do more?  I had to listen to that voice in my head that said go for it!  Teach like you care about the students.

I won’t ever let my subject area be more important than the people I teach.  We must relate to our students in a way that they feel respected. I don’t take myself too seriously; I want to be real, vulnerable, and accessible.

I’ll never forget that my number one job is to leave the students with a sense of wonder, enjoyment, and belonging among the memories of our time together.  What I taught was a distant second to these other things, and that is the way that I would teach.

So away I went and started teaching, and early on I had this thought that I should write it down.  I wanted students to know how to be successful.  I wanted parents to support their kids in order for them to feel like success was attainable. And probably most importantly, I wanted teachers to teach this way too.

I wanted teachers to stop thinking that their subject lessons were the most important thing, and recognize that the value of what they do is in the relationships and impressions that they leave behind. The content will come and the learning will happen. I wasn’t afraid of losing any of that.  But I strongly believed that school had been done (I guess you could say) wrong for a long time, and I wanted to be an agent of change.  Naïve as that may have been, I headed off to a career in teaching thinking this way, and I never looked back.

So I’m introducing this blog series to you today.  I hope I have you intrigued to want to read more.  I want you to share my excitement for teaching, for influencing the future, and I want to show you how I have evolved over the years as a teacher by reflecting on what I wrote all these years ago.

To teach better, I believe we must reflect better.  It’s my goal through this blog series to show you how I reflected on my practice at the beginning of my career, throughout my career, and how I still do so after 27 years into my career.

Tim has been teaching in Langley British Columbia for over 25 years. He is a science teacher, particularly astronomy, which is a course he has developed into a full credit senior science course. In his school, he is known as AstroStephenson. Way back at the beginning of his teaching career, he wrote a book, really to himself, that contained his teaching philosophy. It was a project that would define his career. He is a possibility thinker, a dreamer and a doer, an innovator.

From the very beginning, he knew that he wanted to teach by putting students and relationships ahead of content, and putting experiences and emotions ahead of curriculum. The result has been a long career of rich and rewarding experiences for both himself and his students. He’d like to share those experiences with you and give you some insight from both near the beginning of his career and now near the end.