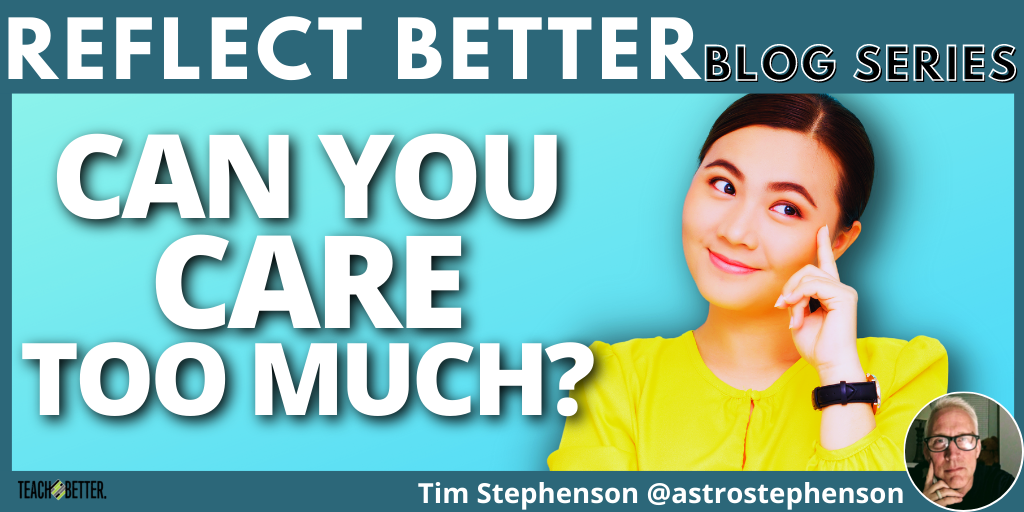 If you’ve read any of my blogs over the last couple of years, then you would have noticed that there is a theme. Most of my posts have included words of encouragement and strategies for managing stress. It really just comes from a place of wanting to help, hopefully empowering you to be the best teacher you can be.

So with that in mind, I feel a need to share something with my readers. You see, I’ve seen enough posts on Twitter and listened to teachers at school to know that many are categorizing this year as the hardest they’ve ever experienced. Perhaps it has been, but just as beauty is in the eye of the beholder, difficulty also can be a self-fulfilling prophecy.

To be sure, I am well aware of the effects of the pandemic and the incessant demands of implementing new practices.

Here’s a tough question: Are the stresses of teaching coming about because we’re upset that the lessons and strategies that have been so effective for so many years, just aren’t being received well anymore? Is our round peg just not fitting a hole that is becoming more square every year? These are questions worth considering.

I don’t care about starting the class on time because I may be using those first few minutes to connect with students about any number of things. Click To Tweet

With these in mind, I would now like to say that I’m not writing this to add to your stress. Rather, I want to highlight a starting point that is effective in today’s classroom and can be implemented right away with no prep time required. Sometimes, the solution to our difficulties can be found in our human-to-human interactions.

I wrote about this in my book Beyond the Classroom and I’m sharing it with you now in the hope that you receive it with all due respect for the place you are in and the school that you teach at. Here it is:

I’ve started to use an expression recently that may sound shocking. I’ve come to realize that I’ve taught long enough that I don’t care anymore. But if I may, I’d like you to consider that to be a good thing. I’ve found that there are a lot of things that I don’t care about anymore that have allowed me to be an effective teacher. I also believe that this perspective is not limited to just the seasoned veterans of the classroom. At any point in a career, a teacher can adopt this mindset and it may have a profound impact on how you teach and how you run your classroom. It will certainly make you different! So, what sort of things am I talking about? Here are some examples:

I don’t care about starting the class on time because I may be using those first few minutes to connect with students about any number of things and that’s more important than the old standard of “there’s the bell, open your books, settle down, be quiet.”

I don’t care if a student comes to class late because for the ones that often do, it’s a major victory that they’re even there at all. For the ones that come in late very infrequently, there’s usually a good reason and I can forgive them. Not to mention that I’ve been late from time to time. It might have been unexpected traffic, an important conversation with a colleague in the hallway or maybe I just needed to use the washroom. I’ve learned to understand where my students are at and what battles I’m willing to take on.

I don’t care if a student asks me a question during a test. In fact, one of the best tests I’ve ever given had the students work in groups designing the questions (this was a Grade 12 Chemistry class), developing the answer key and then giving the test to their peers. They then had to mark it using their answer key. The tests were returned, and the test writers were allowed to discuss their answers with the test designers. They could ask why it was marked a certain way and the writers could explain their process that may have been unclear. It was so good! The learning was stupendous. Oh, and it took several classes to get that done. But I don’t really care about that.

I don’t care if a student interrupts me with a silly comment because it may not be silly to them. One time I had a lesson planned out when suddenly, a girl asked me “Is there grass on Mars?” Students kind of laughed at her for the question (I mean, after all it is the red planet, not the green one). But would you believe that for the next two weeks, our class time was spent discussing the atmosphere on Mars, the amount of water that might be there, temperatures, soils conditions, and exploration. It was one of the best series of lessons I’ve taught and all because a student interrupted me with a silly question, which wasn’t so silly after all.

I don’t care if what I teach isn’t supposed to be taught in this grade or that one. If I think that it will help my students fully understand a concept, I’ll teach it. If they hear it again next year, all the better for them anyways. Nothing wrong with repetition.

The irony is that to teach better, my suggestion is that you stop caring about these sorts of things. What sort of list could you put together? If you really think about it, you will find that most of these things fall heavily on the shoulders of tradition, and if it was a problem for classes over the previous 100 years, then maybe we should move on. There may be bigger and more important fish to fry.

So, as odd as it might sound, I’m suggesting that you first set out to make your teaching “different” from what anyone in your class would naturally be expecting… and then (cautiously, I say) stop caring! The results of this type of philosophy are students that want to be there, are interested in learning from you, engage with you and most importantly, feel respected and valued. Isn’t that what we all want?

Best wishes to you all for a continued restful and reflective summer. Reach out to me on Twitter DMs if you’d like to discuss these ideas further.

Tim has been teaching in Langley, British Columbia for over 25 years. He’s a science teacher, particularly astronomy, which is a course he has developed into a full credit senior science course. In his school, he is known as AstroStephenson. Way back at the beginning of his teaching career, he wrote a book, really to himself, that contained his teaching philosophy. It was a project that would define his career. He is a possibility thinker, a dreamer and a doer, an innovator.

From the very beginning, he knew that he wanted to teach by putting students and relationships ahead of content, and putting experiences and emotions ahead of curriculum. The result has been a long career of rich and rewarding experiences for both himself and his students, the pinnacle being in 2018 when he was the recipient of the Prime Minister’s Award for Teaching Excellence.

Now Tim would like to share with you his thoughts and experiences on teaching with the hope that by reflecting better, you will feel empowered to try new things, teach in new ways and see the possibilities that are there for all of us in the teaching profession.